Trish Marmo, Health and Wellness Coach, DBA Fitness MOMents® is an Amazon Affiliate. This means that when I endorse, recommend, or write a testimonial about a particular product that I use or love, I have the opportunity to earn a small commission for it. These items can be found in links to any products or services from this website. So, when I make a recommendation, it’s something I actually use or would recommend to a family member or friend. Clicking on these links does not increase your costs. Your purchases simply help support my work, my penchant for tea and let's not forget my love of chocolate...we can't forget the chocolate!
One of the most convenient and effective ways to replace good or “friendly” bacteria is by taking a probiotic supplement. Unfortunately, just because science has determined that a probiotic may support immune health doesn’t mean every product on the market actually accomplishes this. In fact, over 90% of probiotics currently on the market today just don’t survive the acidic environment of the stomach and therefore, cannot be called “true” probiotics. You see, the World Health Organization (WHO) has determined that for a probiotic to truly be called a probiotic, it must arrive in the intestines alive. The sad fact is that over 90% of probiotics on the market today do not survive the harsh conditions of the stomach and therefore arrive dead in the intestines, therefore providing little to no “probiotic” benefits. ~Tina Anderson, Founder, Just Thrive® Probiotic 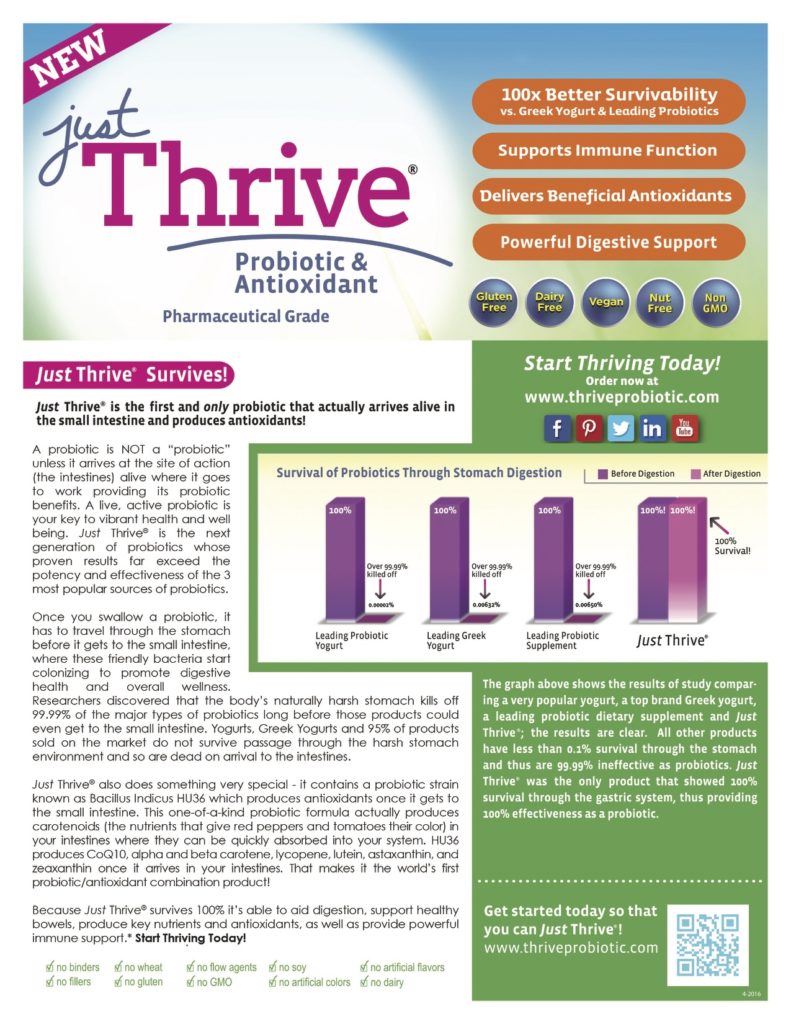 Several months ago, I was contacted by Mamavation to see if I was interested in trying out a new product.  Coincidentally, I was approaching my 50th Birthday and had been plagued by feelings of fatigue, lack-of-energy, and ongoing bowel issues (TMI, I know).  I’d just hired a Bikini Coach (because what 50-year-old woman, with a million things on her plate doesn’t need to add just one more thing)?  I’m relatively new (since my mini-strokes in 2011) to taking supplements.  If I’m being totally honest, I thought they were a bunch of expensive “Woo” in a pill! But after my TIAs, when the doctors prescribed pill after pill after pill, I realized that I needed to take control of my life and get things back on track.

I’ve been a Registered Nurse for 25 years and I’ve always been fascinated by Nutrition Science, but after my “wake-up call” I decided to take my fascination and put it to good use.  While “Dr. Google” was a great starting point, it had its limitations. Anyone who’s done an internet search can tell you that the “information superhighway” is strewn with lots of garbage!  If you REALLY want to educate yourself, you have to get an education.  So I set out to become certified in Nutrition Science: 1) So I could help heal myself and 2) So I could help others.

Fast forward to August of this year, when I was given the opportunity to try Just Thrive® Probiotics for the first time. I’d like to point out that the same year I had my TIAs, I saw a Gastroenterologist and had both an upper and lower endoscopy for the first time.  In addition to the esophageal reflux and erosions that I was experiencing at the time, I was diagnosed with CIC (Chronic Idiopathic Constipation) and Low GI Motility–something I’d suffered with since childhood.  To put it delicately, I typically go to the bathroom once a week–regardless of my hydration status, how much, or how little, I eat.

After my colonoscopy, I was put on three different medications, the latter of which was designed to help me go to the bathroom.  If it just affected my intestines, I might not have had any complaints about it, but in addition to the severe cramping and dry mouth, it gave me heart palpitations and caused dizziness. When I decided to change my eating habits and focus on healing my brain and my body with food, I also decided to wean off those medications.  It didn’t resolve my problem (I still only went to the bathroom once a week), but at least I didn’t have the other side effects to deal with. 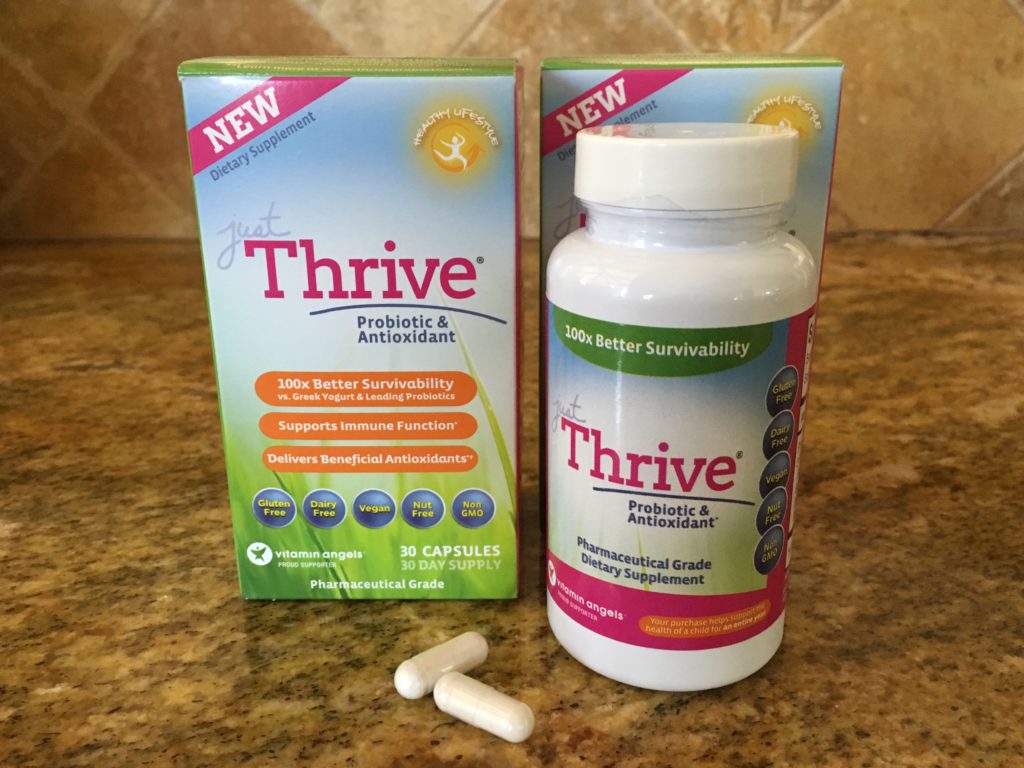 Prior to trying Just Thrive®, I’d purchased other Probiotics over-the-counter with the same results…no improvement or change.  It was frustrating to spend money on products that didn’t live up to their promises.

By the time I received my shipment of Just Thrive®, I figured I really had nothing to lose.  If I didn’t notice any changes it wouldn’t be a big deal, because I didn’t know any different.

Five days into my Just Thrive® Probiotic regimen (and almost every day since), I’ve been completely regular! In fact, I was so excited, I wrote to the Mamavation Project Manager to share my excitement! LOL. (Poor woman, she’s probably wondering, “What in the world?!”)

To say that I was shocked (and 90 days later the novelty STILL hasn’t worn off) would be an understatement!  It has me wondering how I ever lived this long suffering from the inability to do something most people take for granted every day!

I would highly recommend Just Thrive® Probiotics and am excited that Amazon carries them (Woohooo! Amazon Prime)!!!

Check out the link for Just Thrive® Probiotics and place your own order here!

After my little Just Thrive® experiment, I am true convert and recommend their Probiotics to family, friends and clients alike! 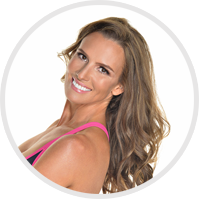 Trish Marmo is on a one-woman mission to help busy women over 40 “wake up” to being their best selves and reclaim their health and fitness! If you’ve woken up to the fact that what you’ve been doing isn’t working any more, or you don’t recognize the person you see staring back at you in the mirror, then let’s talk!  Schedule a Breakthrough Session here or learn more about how I can help you here!